Part 7 – After The Tawse

There was still plenty work to get on with.

Unfortunately Malcolm had been diagnosed with Multiple Sclerosis in the late 70’s he worked on for a good number of years before retiring with poor health in 1987 age 30. I flirted with the idea of joining the family business, after all I had helped out in the shop and workshop since I could remember but in 1981 I was offered an apprenticeship as a mechanical technician in Ferranti, Edinburgh so of I went.

Things are always changing, Dad developed a new range of products supplying specialist instrument cases and workman’s gear to the oil industry and tourist goods to a successful Scottish producer of traditional jewellery. So in 1989 they sold up the shop and moved to a workshop at home in Plantation Street Lochgelly with thoughts of semi-retirement.

In 1991 I joined Dad in the workshop, on a part time basis at first, Ferranti’s had run into problems and I was amongst the massive redundancies, but it wasn’t long before I was hooked, I guess Leatherwork is in my blood after all.

In 1996 dad and I decided to commemorate the Lochgelly Tawse by selling a replica miniature with history scroll, unfortunately in this brief history we managed to spell Robert Philps’ name wrong (Philip!). Oops! Well it never was our strong point thank goodness for spell checks. 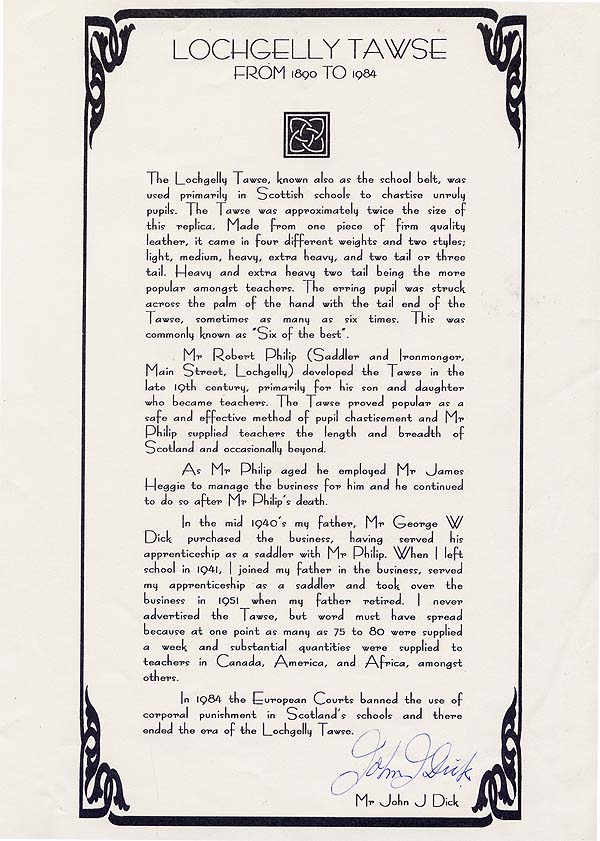 Over the next few years I absorbed as much knowledge as I could from Dad, learning many traditional saddlery techniques but saddlery was not really my area of interest, to broaden my education I worked several days a week for MacKenzie Leather Goods Victoria Street Edinburgh, manufactures of quality handbags, briefcases and portmanteau. By 2000 dad had gradually retired and I’d just as gradually taken over the business. 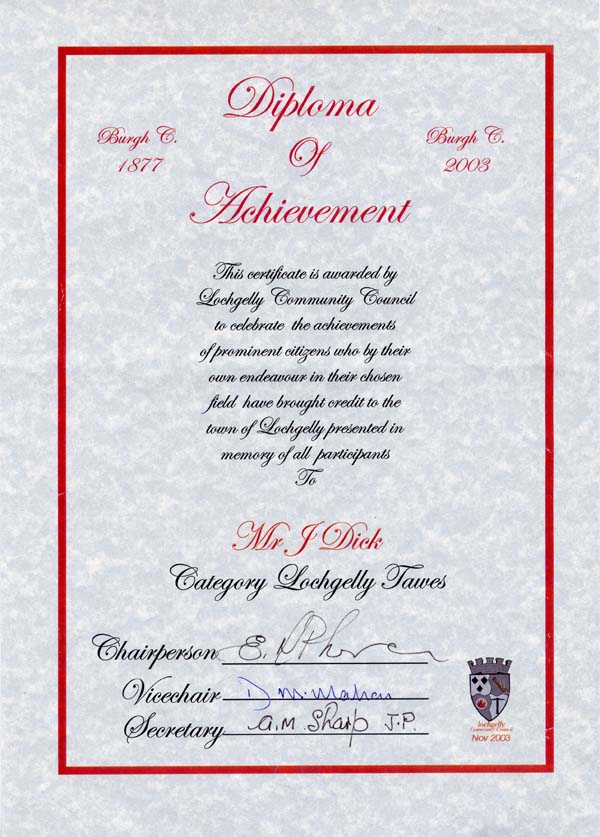 Sadly dad died in 2005 but today I’m still trading as John J Dick Leather Goods in my workshop just outside Lochgelly. From here I continue to supply instrument cases, workman’s gear and tourist goods to other companies but also bespoke bags, briefcases, sporrans, belts, guitar straps, tankards etc. direct to the public and the odd custom replica “Lochgelly Tawse” (for collectors only) when I can source a suitable hide.

Any cookies that may not be particularly necessary for the website to function and is used specifically to collect user personal data via analytics, ads, other embedded contents are termed as non-necessary cookies. It is mandatory to procure user consent prior to running these cookies on your website.