The teachers liked this new belt. It was narrower so easier to wield, firmer so it didn’t wrap around the hand and was well made with no sharp edges to cause serious damage but it didn’t really take the skills of a Master Saddler to make it, so often one of Robert Philp’s apprentices would get the job.

Robert Philp’s stamp was used from 1884 right through to 1948, the simple teeped version initially superseded by the R.Philp & Son stamp once his son joined the business. It was used by the master saddler himself and by Robert Walker Philp (born 1872 died 1929). Robert Philp’s youngest son who started his apprenticeship around 1886.

James Heggie (born 1876 died 1954) served his apprentice from the early 1890’s and stayed with the firm as a qualified saddler working for Robert Philp senior until he retired around 1906, then worked on for Robert Philp junior until his death, he then continued as manager eventually purchasing the business from Robert Philp senior’s widow Margaret. He continued the manufacture of the Lochgelly Tawse still using the R.Philp and Son stamp right up until he sold the business in 1948.

As time went on most every saddler and quite a few cobblers would make something similar to this new belt. Approx 30 other maker’s stamps existed but not all manufacturers would have put a name stamp on their belts so it is safe to assume that there was at least double this number making their own version. The Lochgelly Tawse is estimated to have held the lion’s share of the market some say as much as 70%. 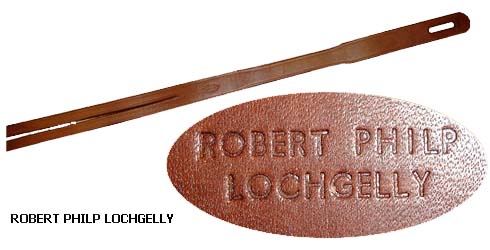