BY 1949 THE YARD AND THE LOCHGELLY TAWS ARE A RIP ROARING SUCCESS.

It is from the mining town of Lochgelly that today leathermaker Mr George Dick despatched his bundles of tawse to all parts of Scotland and across the border. But first let us look at the business which Mr Dick controls -a business in which the making of the tawse is subsidiary to the larger and more complex organisation of coachbuilding.

Coachbuilding and the manufacture of leather straps appear to have little in common but then the firm of G.W.Dick & Sons is a unique family concern. Mr Dick’s four sons-Alec, George, Robert and John are in the business with their father, yet each performing an entirely different trade-painting, coachbuilding, smithcraft and saddlery. 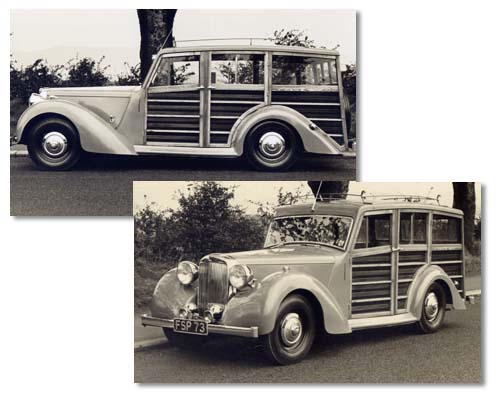 ~A Shooting Brake coach built at The Yard~

Evidence of the popularity of this family business with its workers is found in the leather workshop where two of the craftsmen have been with the firm all their lives. Andrew Taylor and William Keddie, both skilled in their trade, not only turn out tawse and footballs but also a large variety of leather work, including harness, shopping bags and the upholstery for the coachbuilding side of the concern.

Inside part of the coachbuilding premises where the bodywork is made for all types of motor chassis works George Dick junior, Robert Scott, Robert Brown, Andrew Goodall and James Eyles. Here the intricate metal parts for the coachwork of lorries, vans and shooting brakes are hammered out to the required shape and size on the anvils. Heated on the forge, the iron is wrought by the workers-a job calling not only for physical strength but also a keen perception of what the finished article should be. The metal work of coachbuilding however is not the only work undertaken in the blacksmith’s shop. Horses come in to be shod and in this respect the smithy furnishes examples of the old and new-parts for modern vehicles and the horseshoes for the slower but none the less dependable animal.

Working in the smithy is 66 year old John Simpson who has been in the trade for fifty two years. John who hails from Perthshire started work as a boy of fourteen in the blacksmith’s shop of his uncle. Since then he has travelled to many parts of the country, still following the trade to which he was apprenticed as a young lad.

One of John’s outstanding abilities was the shoeing of horses used on the farms of Perth and Fife. Entering for horse-shoeing competitions at agricultural gatherings in the eastern counties, he gained more than an average share of the prizes and when in 1927 he won the horse-shoeing championship of Fife at Ladybank he was first in the light-horse section and also won the championship of the field The lad who does the horse-shoeing now is 22 year old James Farmer.

Startling feature revealed by Mr Dick seems to indicate that the schoolroom unruliness of the young people today is increasing. Orders for “Lochgelly Tawse” last year showed a fifty per cent increase over the previous twelve months. But Mr Dick is not inclined to lay all the blame at the door of the children. Factors which he attributes to this increase in his business include the raising of the school leaving age and the larger number of teachers being turned out by universities. Another point to be borne in mind is the trend in England to do away with the cane and with a greater number of Scottish school teachers taking up appointments south of the border, the fame of the Lochgelly “correctors” is increasing, as evidenced by the orders which pour into Mr Dick’s shop in Main Street. Mr Dick and his son John carry on the leather making side of the business in their workshop in Main Street with another workshop a few hundred yards away in the High Street.

The making of the tawse is all done by hand. Two feet long strips of leather are cut from hides which are already tanned and curried. The leather is then dressed and the tongues cut halfway up the middle. It is these tongues which provide the nip when they strike the erring pupil’s hand. Mr Dick is inclined to discount the story that at one time the leather was dipped in rum or whisky to provide an extra nippiness when in use. On behalf of Mr Dick it must be said that not only does he provide the means of pain for the young scholar but also the pleasure. Part of the leather-making business consists in turning out footballs which go to schools and more senior players. The eighteen-pane leather ball is hand stitched-a job that calls for the greatest patience and neatness.