Now to the 70’s and ‘the times they are a changing’ Metrication and Decimalisation. The unions went from strength to strength and co-operatives expanded taking over the shopping streets in many small towns, Lochgelly included. Car production became automated and private transport flourished. Birth control, test tube babies and artificial insemination. Eating habits changed with Marks and Spencers providing the first ready meals, Frae Bentos pies in tins, Cremola Foam and Bird’s Angel Delight, to name but a few.

The Co-operative was a large and very successful operation in Lochgelly they seemed to have it all covered, Butchers, Bakers, Grocers, Green Grocers, Hardware, Furniture, Toys, Gardening, Funeral Services. Even some of the small corner shops bought their stock from the Co-op and got their profit from keeping the dividend. They didn’t have Saddlery covered but however,  it was all motor vehicles now the store horse was long gone and a few pet ponies wouldn’t provide a living. So what now?

Cowdenbeath High Street was still thriving with independent businesses and people were prepared to travel for shopping so John and Diana Dick moved the business to Cowdenbeath. Leaving behind Ironmongery, toys and gardening they stuck with Saddlery, bags, briefcases and luggage and diversified into fancy goods and suede clothing, dressing the local bright young things in the latest suede mini skirts and waistcoats. At this point my Brother Malcolm John Dick (born1956) left school and joined the business as an apprentice Saddler. 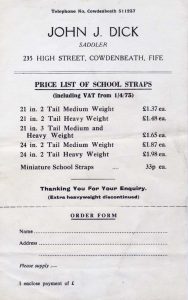 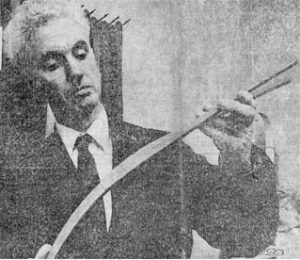 Where the smacking process begins: John Dick at his Lochgelly belt factory.

Demand for The Lochgelly Tawse was still strong and it too was ‘a changing’ into the belt’s final incarnation. Around 1975 Dad decided it was time to embrace new technology. The belt had been made the same way since Robert Philp senior’s time using tools in use for hundreds of years, he had probably personally made more belts than any of the other saddlers, apprentices, cobblers or have a go’s anywhere or it certainly felt like it. His tennis elbow was ‘giving him gip’, and it was time to modernise so he bought a 3 phase cutting press and had cutters made in a new ‘one size fits all’ metric size, a couple of chomps and a belt was cut to shape, complete with tails and hole just needing edged, polished and creased. Hallelujah !

In 1978 Dad bought a blocking machine and had a new stamp made for the belt. This stamp was branded on using heat unlike the earlier stamps which were stamped on using a teep and hammer. 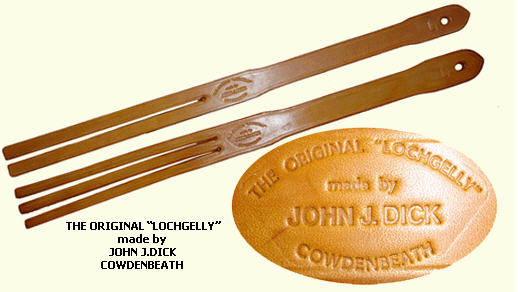 Public opinion on corporal punishment was slowly changing, from the mid 70’s primary schools were using the belt less than ever before, sales of the light weight (L) belt used mainly by primary school teachers was dwindling, the extra heavy (XL) leather was proving difficult to source so at times only the medium (M) and heavy (H) were available. 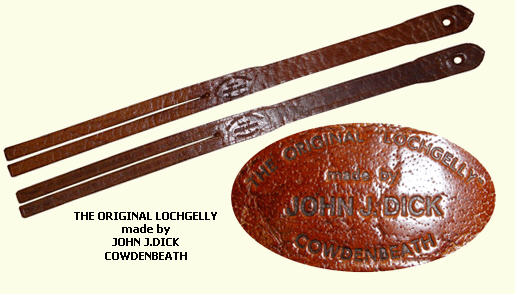 As the decade went on it became harder and harder to source thick enough leather to make the heavy and extra heavy tawse. The preference for leaner and leaner meat, intensive farming and artificial insemination meant cattle were being slaughtered younger and there weren’t so many bulls about to provide a regular supply of leather this thick, my father experimented with bonded belts but they weren’t very successful and sometimes split, you couldn’t machine stitch them as the stitching might cause hand damage in use and hand stitching was prohibitively expensive, eventually he managed to find a supplier of buffalo necks and supply was resumed and if the look of the belt had changed to a darker colour and a grainy finish the teachers weren’t complaining, and it made no odds to the children.

In 1976 Mrs Grace Campbell whose son Gordon, age 6, attended St. Matthew’s RC Primary School in Bishopbriggs, and Mrs Jane Cosans whose son Jeffrey, age 15, attended Beath High School in Cowdenbeath, raised an action in the European Court of Human Rights objecting to corporal punishment in school. The court heard the case in 1982 and found in favour of the action instructing that the use of corporal punishment in UK schools be ended. The use of the belt in state school was phased out from 1983 onwards. Corporal punishment was finally banned in state schools in 1987 and continued in fee-paying schools till it was banned in those too in 1998.

< John Johnston Dick    The Lochgelly Tawse     After The Tawse >